Can a new access road be made to divert construction traffic out of the residential area?

This would require an access drive off of the on ramp to RT 101, which is not something that would likely be permitted by NH Department of Transportation.  An access road in this location would also be directly off the backyard of 3 Falcone Circle, and would require removing the current vegetated buffer between them and the highway.

Can the access road be gated to prevent unwanted traffic?

The road is a public Town road and any change in its use is determined by the Hampton Select Board.

How long will the rehabilitation of the existing tank last?
This tank is a large structure with a great deal of surface area.  All surfaces must be cleaned and, where needed, repairs made before the tank can be repainted.  The coatings will be applied carefully and the work inspected thoroughly before we can consider placing the tank in service again. This process will take many months to complete.
How will the new tank change the appearance of the neighborhood?  What color will it be?

See the renderings below.  The new tank will be built to be functionally and visually identical to the existing tank.  At the end of the projects, both tanks will be painted with gray columns to blend in with tree bark, and topped with white tanks.

What are construction impacts to the neighborhood?

During construction, there will be an increase in daytime traffic on the roads leading to the tank site.  Contractors will not be allowed to block the roads for any extended periods of time, nor be allowed to interfere with school bus routes and schedules, emergency response routes, etc.

All construction activity will be on Aquarion’s property and the public roads leading to it.

Standard construction methods will be employed to control dust, noise, traffic and other aspects of the project.

What is the construction schedule?
At this point in time, construction is anticipated to begin in 2020, and be completed in 2021.
What other alternative solutions were evaluated to address this need?

There are other storage tanks in the water distribution, but they are at lower elevations (see Figure 1) and cannot sustain pressure and fire flows to the entire system.  Several alternatives were evaluated to address this need.

What permits and approvals are needed?

The Exeter Road tank is located at the edge of the Industrial Zone (I) in Hampton. Permitting for the new Exeter Road tank would require a variance for structure height and a special exception from the Zoning Board of Adjustment and a Site Plan approval from the Planning Board.

This project will require an approval from the New Hampshire Department of Environmental Services.

When construction commences a Building Permit will be obtained.

What will the new tank cost?

At this time, the new tank is estimated to cost about $4 million.

When will work on the existing tank occur?
It will be scheduled after the new tank is in service.  The work will be timed to optimize both cost and schedule.
Why did Aquarion choose Exeter Road as the location for the new tank?

The company evaluated the three locations listed above for a new tank.  The Falcone Circle location was chosen because:

The Boutelier Lane location has a favorable elevation, and is on property owned by Aquarion.  However, substantial disadvantages include:

The Breakfast Hill location had some advantages (including favorable elevation and property owned by Aquarion’s parent company, Eversource).  But it also had substantial disadvantages:

Why does Aquarion need to build an additional tank?

Water tanks must be taken out of service for preventative maintenance and repairs.  As currently configured, the water distribution system cannot be operated at the required level of reliability nor can the Town of Hampton’s fire protection criteria be met with the existing tank out of service.

The existing tank has functioned in this capacity since its construction in 1982, but now must be taken out of service for a number of months for routine structural rehabilitation and painting.

The existing tank sustains and stabilizes pressure in the water distribution system, and provides fire flow capacity for Hampton and North Hampton.  It cannot be removed from service for any substantial length of time without putting this required level of water service and public safety at risk. 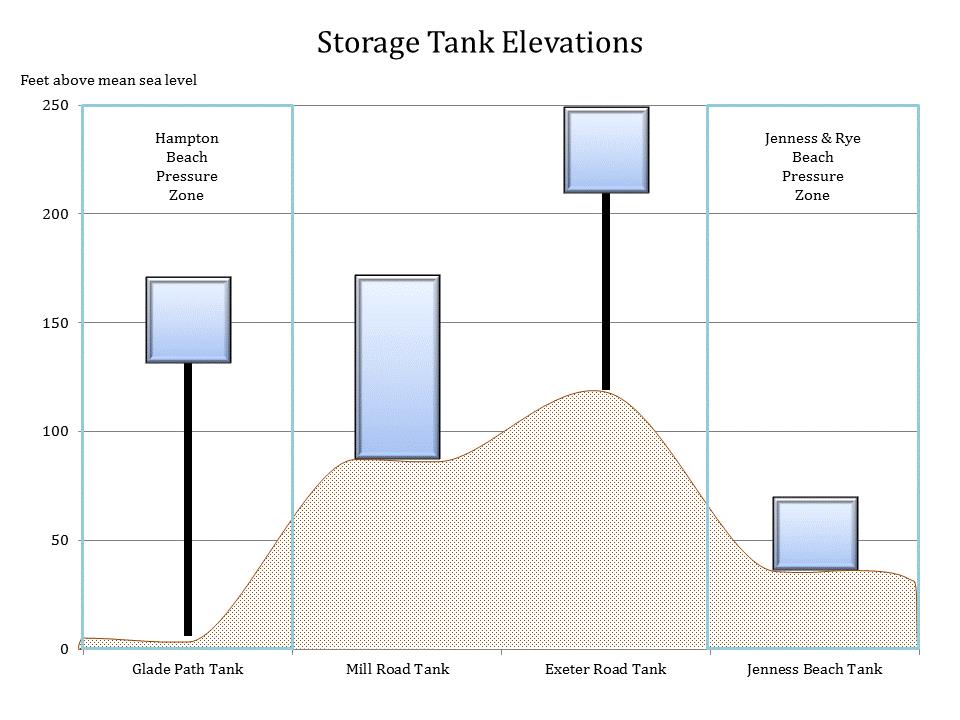 The old tank will have many years of service life remaining after it is repainted and repaired.  Adding a second tank at this site provides for the ability to take one tank out of service without any changes to system operations or decrease in system reliability.  It will also enhance system redundancy and provide for more opportunities to optimize performance and reduce costs.

Why were not two tanks built here originally?

The tank was originally built to the engineering and operational standards at that time to meet the system needs of the time and the foreseeable future.  In 1982, the community and water distribution system were both considerably smaller than they are currently.  There were no neighborhoods at the same elevation of the tank, and at the time it would have been possible to take it out of service because pressure and fire flows could be sustained by the other tanks in the system.

However, over the past three decades, the community has experienced robust growth, which the water system has expanded to accommodate.  In addition to sustaining greater demands for domestic and fire protection uses, growth has spread into higher elevations.  This creates a substantially different hydraulic profile than existed in 1982 and prevents the tank from being taken out of service without a backup.

Constructing a new tank avoids high costs of the alternative of temporary pumping and control systems.

In the long term, having two tanks at this site provides redundancy and increases flexibility for future maintenance activities.  The ability to take one tank out of service without impacting normal operations allows for lower cost opportunities because work can be scheduled for optimum times and duration.

Compared to other site locations, a second tank here does not require any changes to staffing and other operating costs.

Will the tank impact the potential for future development on abutting parcels?
No, the project has no impact or relationship to any current or proposed uses or activities on abutting parcels.
Will there be more noise from the highway?
The new tank and final landscaping may block noise emanating from the highway.  Final landscaping is yet to be defined but will be done to minimize noise.
Will you maintain the access road appearance?
The access road is a public street, owned and maintained by the Town of Hampton.